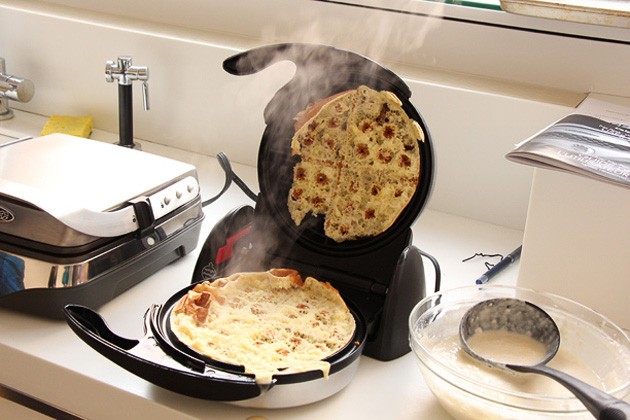 In this article, we will answer the following questions: 1. Why do waffles split when I open a waffle iron? 2. What causes waffles to burn? 3. What fat is the best? 4. How much do I bake waffles?

Do waffles split on the waffle iron? Is the machine to blame?

Waffle machines for classic waffles of the LIEGE type (fine griddle) and BELGIAN type (large griddle) are most often made of cast iron with a greater or lesser degree of perfection.
The surface of the plates that come into contact with the waffle can be more or less rough depending on the quality of the machine. Waffle sticking in the absence of proper treatment is a matter of time. A good waffle maker should have smooth baking plates made of high-quality casting, which will make it easier to take care of.

As a rule, at the beginning of use everything is great regardless of the quality of the plates. If the problem occurs after a longer period of use, and not immediately, it is almost certain that a layer of parched dough residue has appeared on the surface of the plates, among which the most troublesome are:

Gluten – a vegetable protein contained in wheat flour, which sticks to the porosity of the baking molds during thermal processing, turning it into a so-called carbonizate.
Vegetable oils and animal fats – used to lubricate the plates and, as an ingredient in the mixture, which begins to polymerize when exposed to too high a temperature (smoke point temperature). Instead of making it easier to remove the waffles from the pan, it turns into a thick sticky substance that easily sticks to the waffle iron.
Sugar – a basic flavoring present in every ready-made waffle mix, which turns into caramel at high temperatures, giving the waffles their golden color. Unfortunately, caramelized sugar, like the other 2 ingredients, likes the warm nooks and crannies of rough, cast iron baking molds and douses the waffle iron plates professionally! 😊

How to prevent the accumulation of sinter on waffle pans?

The best preventive measure is prevention. We can prevent in several ways….
It is worth choosing the right mix, that is, one in which at least part of the wheat flour has been replaced by a gluten-free ingredient, such as rice flour, corn flour. Less gluten, less trouble.
When choosing a ready-made waffle batter, it is good practice to organoleptically test (taste) different mixtures for sweetness. Choosing a batter with less sugar in it is a double win…saving time and nerves, and a healthier and happier customer who has eaten a less caloric meal.

Do waffles stick? What is the best fat for baking waffles?

Sticky waffles are the bane of any user of professional cast iron waffle irons. The issue of choosing fat is a little more complicated and equally important. It is necessary to pay attention to the smoke point of the fat you use. The best addition to waffles is clarified butter due to its very high smoke point, which is estimated at about 254˚C. In addition, butter added to the batter improves the crispness of the waffle and its flavor, and the waffles stick less.
In general, the most commonly used due to price and availability is refined rapeseed oil, which is reported to have a smoke point of about 204˚C. You should then remember to set the baking temperature 20˚C below the smoke point (in this case, a maximum of 180-185˚C) and wait about 30 minutes for the waffle iron to warm up properly and for the temperature to normalize. Only then do we make the first waffle. The general rule of thumb is “the lower the baking temperature, the fewer problems”.

How much to bake waffles?

How much we should keep a waffle in the waffle iron depends on several factors (including the amount of mixture, the accumulation capacity of the plates, etc.) Acting strictly according to the instructions of the powder manufacturer is not at all the best solution because the manufacturer of the mixture gives averaged baking parameters. They do not take into account the parameters of the machine. You should test the time and temperature settings during baking, as well as the different weights of the dispensed mix. The baking time of a waffle also affects its susceptibility to splitting. Underbaked dough is soft in the center and prone to splitting. It is worth mentioning that if there is steam coming out of the waffle iron then the waffle is definitely not ready. Too high a temperature causes the dough to burn and does not significantly speed up baking. Instead, it can accelerate the carbonization process, which causes many problems. In addition, if you pour too much batter, the waffle iron has to evaporate more water, resulting in longer baking time.

How to take care of waffle irons?

We can also call preventive care of the equipment. Routine cleaning of the equipment should be done before and after operation. After turning off the waffle iron, we always lubricate it with oil to prevent it from drying out, and every day before work we scrub the plates with a slotted wire brush for a few minutes to remove the softened deposits of baked batter from the previous day, then wipe dry with a cotton towel and only lubricate the waffle pans with oil. Sparay oils fall into two categories: without wax and with wax. It is definitely worth using the latter as they create an additional protective barrier to prevent waffles from sticking.

The treatments described above will improve baking, uniform color and ensure the crispness of every delicious waffle you bake, but what if your waffle iron is very dirty?

How do you efficiently remove the thick layer of sinter deposits from the plates? The example below makes a mess and smells burnt, but it’s most effective and, on top of that, free if you have a drill/driver and a rotary brass brush. Simply scorch the waffle iron of oil residue by setting the temperature to about 280˚C for 20-30 minutes, then clean with a brush mounted on the drill on high speed. Clean “until alive,” that is, until the plates begin to shine.

Note: Before cleaning, make sure your waffle iron is cast iron, not aluminum!

1) A good waffle iron should have smooth baking molds made of high quality casting.
2. A finished waffle batter with low sugar content and reduced wheat flour is less messy.
3.The fat added to the batter should have a high smoke point.
4.It is better to use oils with wax to grease the plates.
5. the baking temperature is set 20˚C below the smoke point of the fat and should not
exceed 195˚C.
6.Waffles are baked when steam stops coming out of the waffle iron.
7. A heavily soiled waffle iron is best cleaned with a rotary wire brush attached to a drill after the waffle iron has been fired. 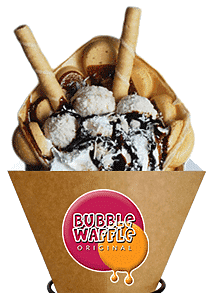 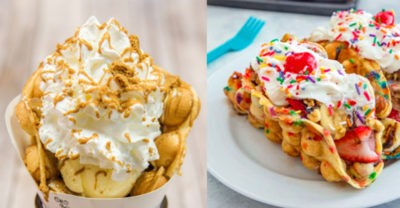 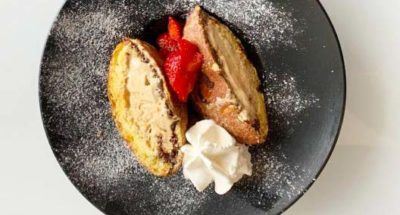 Gelato panini: How did the “ice cream in a roll” 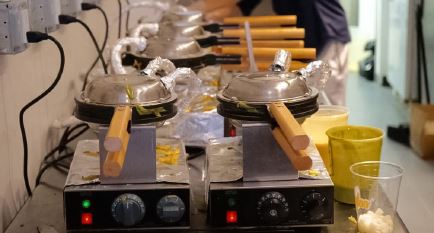 Bubble waffle maker service – how to avoid it?

How to work on bubble waffle irons to avoid unexpected repairs.